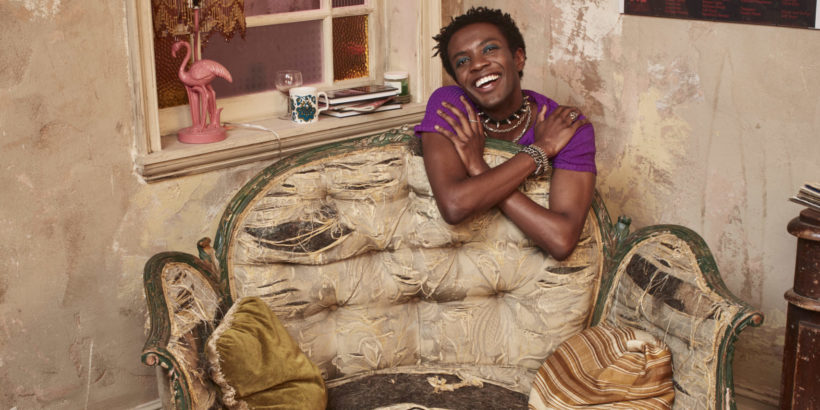 I think the hardest thing was dealing with the revelations those characters had, particularly in episode 3. Because there was this strange feeling of everything somehow feeling not real. And I think this is because all of us get on with each other so well. And hence [redacted]’s fate and those revelations struck us all really hard. There were so many moments that felt really emotional, but we had so much joy as well.

What also struck me was how very sex positive IT’S A SIN is. Today it’s generally still kind of rare to see this kind of positivity but I always feel this to be especially true for queer shows. How was it to shoot those scenes for you?

There was an initial kind of fear. Or maybe not a fear but it just felt weird. I was like „Oh gosh, I’m gonna have to get over this thing“. But once you get over this initial hurdle of feeling so vunerable, you really just start to own that stuff. And I agree with what you’re saying that the show really is sex positive. Especially positive in a way that those scenes are saying something about those characters. The scenes are not there for the sake of just doing something raunchy but instead we are saying something about those characters in those moments.

And for the process of getting into that we had an amazing team of intimacy coordinators who made sure that everything was just so well considered and constructed. You learned you steps, like a choreography basically. And you just take that technical layer and pop on the other layer of character and then those scenes just feel as important as everything else.

The parents of the characters as well as their reactions to them coming out was an important part of IT’S A SIN. And I was happy to see that with one big exception most of those parents mainly came around in the end. Do you think that the whole danger of HIV and people’s fear of it, made it especially hard for 80ies kids to come out and come home again?

Yeah, definitely. Especially the way that it played out in that country [the UK], where the conversations surrounding HIV created fear. There was a lot of scaremongering. And then of course, which is kind of strange anyway, it was almost as if being gay and HIV went hand in hand with each other when it came to a conversation. Which of course isn’t the case. HIV affected everyone, from all walks of life, no matter your sexuality. But of course it did wipe out party of our community in huge numbers. And that community was then marginalised because of that. And there wasn’t any sort of empathy or sympathy with the community. It just made the people more scared of the community.

It really was, that if someone was to tell anyone they were gay, there immediately was this fear of „Oh my gosh, you’re gonna have HIV“. And again, that’s of course not true, but it created uncomfortable conversations. And I think that still now some people carry that fear. I do know people that have said to me that when they came, one of the first things their parents would say to them was „Oh gosh I’m worried that you could contract this“. It’s just crazy what a lasting effect these stigmas can have.

Have you heard about Billy Porter’s recent revelation? He just came out recently as having HIV and how stigmatised this topic is still to this day. Even though it’s actually pretty managaeble and you can have a normal life with it.

Yes I did. And I cried when I read it. It was just so powerful. I admire him so much. He’s so honest and authentic. And he’s been on this really incredible personal journey, as we’re starting to hear now. I just admire his career trajectory. He’s really in a space where he can take ownership of his identity. Particularly for queer people, queer black people, queer people of color, there is just so much that is expected of you. I feel like there’s certain barriers and like there’s only so much you can do [in the media world]. And Billy has this autonomy now, which makes me so glad. Because I think he’s gonna open a lot of doors for people.

Anything by Grace Jones.