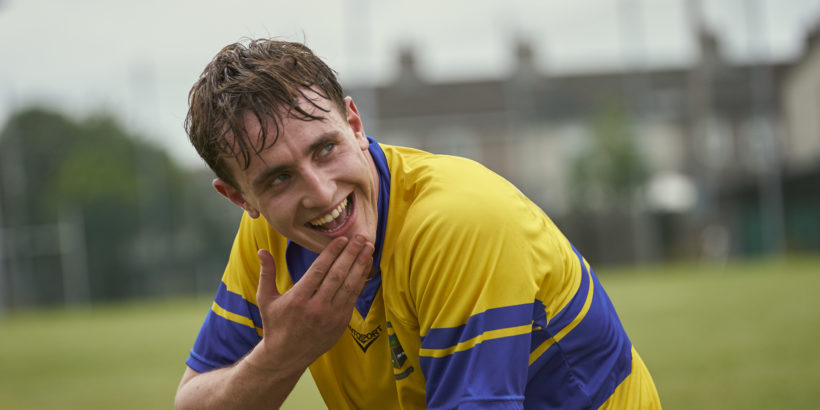 How did you get involved in the project? What was your casting process?

Mine was the opposite process to Daisy’s; I got the scripts sent through and then I made the mistake of reading the book first. The book is incredible, I wanted to literally eat it. The further I got in the audition process, I read the book from Connell’s view which was really interesting.

What do you think is it about the book that people relate to? Why do readers have such a connection?

I think it’s set in a place that most people have experienced. It’s about relationships. Someone has experienced it at some point in their lives on a very basic human level.

What do you think Normal People is about?

The story is about who people navigating their own lives and each other’s lives at the same time. It’s about how wonderful that can be. Love can be amazing but also at times the most crippling. Growing up and finding those things out isn’t the easiest.

What does the title ‘Normal People’ mean to you?

I think I’m biased but to me, it means Marianne and Connell. They are symbols for most people that I know.

What draws Marianne and Connell together? What is the hold they have on each other?

On a very simplistic level, they are desperately in love with each other. But that doesn’t mean they are the best fit for each other. Half the time, I’m so jealous of Connell that he gets to live this full life but in other ways I wouldn’t want his baggage. But there is an instinctive kind of connection that they have, and I think if the characters themselves were talking themselves, they wouldn’t ever be able to articulate to each other properly, which I think is really interesting.

How is life different for Connell in Dublin, than in Sligo?

Connell in Sligo is thrust on this pedestal which makes him quite socially comfortable. It doesn’t necessarily fit him but he’s popular and he’s smart. Socially he just fits, the jigsaw makes sense. But that jigsaw is thrown apart when he goes to Trinity as he knows in his heart of hearts that he does want that, he’s not really capable of adjusting and being something, he has never been seen as before.

He’s not seen as an English student in Sligo; he’s seen as they guy who plays football and is popular. So, he really struggles to acclimatise to that because the people he is seeing on a daily basis are people he doesn’t recognise, and I don’t think Connell recognises himself for a lot of the time he is at Trinity. But it’s about getting reacquainted with Marianne up in Dublin, and figuring himself out, which takes a lot of time, and actually causes him some damage.

Tell us about the shooting process?

It was a long time, but it went fast. It was a massively intense shoot, but it was the best summer of my life as you are making something you are fully behind, playing characters that you really love. We had Lenny and Hettie, Element and BBC so behind us, you couldn’t dream it up.

I met Sally for a coffee in Dublin after I’d been cast as Connell, and I think I was more nervous walking to the coffee shop to meet her than the audition. These characters have been created in her brain and sat there for 5 or 6 years. She was so gracious and it’s such an incredible stamp of approval. It gave me so much confidence going into the shoot when she said she was happy.

Sally didn’t come on set a huge amount, but when she did, she had an incredible way, I can imagine it can be quite nerve wracking for everyone on set when the creator of the story is coming on set, but she had a really gentle presence and very positive, it just filled me with loads of confidence, which I think is such a power.

What does Marianne mean to Connell?

I think Marianne represents all the things that Connell really wants to be. I think she makes him want to be braver than he is. He looks at her I think that he is in absolute awe of her, and wants to be her in certain capacity, or at least have a lot of things she has, that he doesn’t. Ultimately towards the end of the book there’s moments where she does save his life a bit. In moments when he’s is deeply depressed, she’s the person who drags him out of it, there’s not really anything better she could do than that.

Marianne is the catalyst for him, she’s able to look at him and recognise who he is. He takes the plunge and goes to Trinity and really struggles climatizing to that environment. I don’t think that he recognises himself for a lot of his time in Dublin. He gets reacquainted with Marianne in Dublin and figures himself out which takes a lot of time and actually causes some damage.

What was your favourite moment when filming?

I have many! But what most sticks out is wrapping the shoot on the side of a mountain in Italy. It was perfect and there was an amazing atmosphere on set between actors, crew and everybody, who was making something that they loved and for it to be finished it was just incredibly cathartic and lovely.

What excites you about the series?

What do you hope audiences take from the series?

I hope that they recognise that regardless of where they are watching it, this a world that they live in and they exist in. Hopefully it will give, or it will illuminate certain difficulties that everybody goes through.